We’ve all heard the warnings and seen the commercials and billboards warning people about the dangers of texting while driving. According to the most recent texting and driving accident statistics, far too many people fail to heed these warnings. Many drivers are over-confident in their driving abilities or they simply don’t realize how much of a distraction their phone causes. Over 1,000 crashes and about nine deaths in accidents involving a distracted driver occur daily in the United States. Although there are other forms of distracted driving, texting is the most common, especially among teens. The majority of distraction-related fatal crashes involve drivers under the age of 20.

These statistics include the injuries and deaths of texting drivers and their innocent victims. If you cause an accident while you are distracted by texting, you could end up having to pay compensation for another person’s injuries or wrongful death.

What Happens When You Send or Receive a Text While Driving

Many drivers mistakenly think that glancing at their cell phone long enough to read or send a text isn’t enough to affect their driving. On average, it takes at least 5 seconds. This is enough time when traveling the average speed of 55mph to travel the length of a football field. To gain a better perspective of what that means, imagine driving end-to-end across a football field wearing a blindfold. Now, think about doing the same thing on a road with other drivers and pedestrians around you.

There are three types of distraction including:

Distracted driving is anything that causes you to take your eyes, hands, or mind off of your driving. The reason that texting and driving accident statistics are so frightening is that texting includes all three types of distraction. All it takes is for a driver to take their mind off of the road for three seconds for an accident to occur.

The number of accidents and fatalities caused by texting and driving is shocking. The following statistics are some more eye-opening facts to consider before you pick up your cell phone the next time you drive. Check out these Texting and Driving Statistics:

Although research and polls continue to reinforce the idea that the biggest problem with texting and driving is with teen drivers, there are plenty of adults who text while driving for a lot of the same reasons. They feel that their driving skills make up for any risk that goes with taking their eyes off the road.

Currently, forty-seven states have laws prohibiting the use of hand-held devices while driving. All forty-seven are primary enforcement laws, meaning that an officer can cite the driver independently of any other offense. Although some states are working to get stricter laws passed, some common behaviors of the offenders hint that this isn’t the most effective approach.

According to the texting and driving accident statistics from the Centers for Disease Control and Prevention, the same teens who admit to sending a text while driving are also less likely to wear a seatbelt, more likely to drink and drive or ride with another driver who is drinking. If teens already know that texting and driving is dangerous and illegal, stricter laws aren’t likely to help.

Graduated Driver Licensing Programs (GDL) have had some success at reducing crashes among 16-year old drivers. These programs exist in all US states and in Washington DC. They provide teen drivers with the opportunity to gain experience and build their driving skills while driving under adult supervision.

Do Teens Need Cell Phones at All? 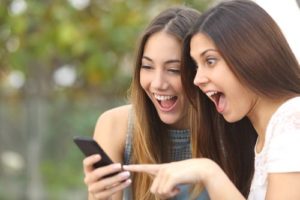 Most teens feel like they have to have a cell phone today just to stay active in their social circle. Parents also like to have their teens within easy reach so they know where they are at all times. Cell phones are a good safety tool in some situations, such as when their car breaks down while they are alone at night.

Although texting and driving accident statistics show that texting is the biggest concern for teens, talking on their cell phone also has some dangers. Just having a conversation with another person takes some of your attention off of the road. Holding a phone in your hand demands even more attention and keeps your hand off the wheel.

Many people feel safer when they use hands-free devices that allow them to keep both hands on the wheel. This still doesn’t answer the concern of taking your mind off of your driving. Remember, there are three types of distracted driving. Texting is the one that includes all three types. That doesn’t mean that activities which only include one type of distraction are safe either.

Technology might offer the best solution of all. There are hardware devices you can install in your teen’s car which works with an app on their phone. When you subscribe to their service, it not only prevents texting while driving but also any type of distracted driving. It’s easy to install, effective, and the service costs less than $10 a month!

If your teen gets into a situation requiring their cell phone, they can use it as long as they aren’t driving. It serves the purpose for everyone and eliminates risky behavior that could cost someone their life.

Consider a Course in Defensive Driving

Teens who take to the roads after finishing driver’s education lack the experience needed to make good decisions. There is no substitute for experience and no way to get it without driving. One way to help boost a teen’s awareness and learn better driving skills is through a defensive driving course.

It’s not uncommon for teens to take a ‘devil may care’ approach to everything they do. They feel like they are immortal and nothing bad will ever happen to them. They don’t know that they are putting other innocent victims at risk or that they could end up paying drastically for their mistakes.

A defensive driving course teaches drivers to not only look out for themselves, but also for other drivers on the road. They learn how to keep their eyes on the road and take a proactive approach to preventing accidents. Teens need to realize that driving is a privilege and not a right. If they don’t follow the rules and the laws, it could mean the end of their freedom or their life.

Put Them in the Right Car

Parents sometimes pass their older cars down to their teens in case their lack of driving skills result in some dings and dents. Technology advances every year, making cars safer to drive. If you really want to keep your teen safe, consider a newer model car. These features probably won’t stop them from all of their risky behavior, but it could help prevent accidents just the same.

Bluetooth – Vehicles that have Bluetooth allow teens to use voice commands when they use their cell phone, even when they respond to a text. This feature is designed specifically to prevent distracted driving by teen drivers.

Navigation – This feature is included standard in a lot of vehicles today and it can keep teens safe in two ways. It will help keep them from getting lost and it is a better option than using an app on their cell phone to map their path.

Airbags – When an accident occurs, you want your teen to be protected from impacts that can be deadly. Newer vehicles include more airbags to protect the driver and passengers from every angle.

Parental Controls – These vary on different model cars but they can include location tracking, speed limits, and access to reports that let parents monitor how their teens drive.

Crash Notification System – If a crash is severe enough to activate the airbags, the system automatically notifies authorities. This feature ensures that anyone who is injured will get medical help as quickly as possible.

Lane Departure Warning System – This system alerts the driver whenever the vehicle starts to veer out of its lane. This feature helps when teens take their minds off their driving long enough to let their vehicle start to drift. It’s also handy for drowsy drivers and correcting driving error before it turns into an accident.

The best car for a teen isn’t the one that you don’t mind getting banged up a little. It’s the one that is going to give you peace of mind that your teen is safe.

From the time they are born, children mimic the actions of the adults in their lives. If your teen sees you texting and driving, they are more likely to follow your example than what you tell them to do. If you really need to take that call from work, pull off the road in a safe area. The best way to prevent your teen from becoming one of the texting and driving accident statistics is to lead by example.

If you or someone you love has been injured in an accident caused by a texting driver, contact Batta Fulkerson today. We are personal injury attorneys who know your rights and can help you get the compensation you deserve.