You’re sitting in stop and go traffic; you’re headed home from work and you have your windows rolled down. You can hear the sound of a motorcycle getting louder and closer. Suddenly, a motorcycle zooms past you and you watch them drive by all the traffic you’re stuck in until they disappear into the distance. If you live in California, this is a likely scenario due to lane-splitting laws and guidelines.

If you’re driving in California it is more than likely that a motorcycle passes you between another car. This can either be lane splitting, lane sharing or lane filtering.

Lane filtering is when a motorcycle passes its way through slow-moving or stationary traffic. For example, at a stoplight when other cars are stopped but they proceed forward to the front.
Lane sharing is when two motorcycles are in the same lane, side to side or staggered, but they are sharing the lane together.
Lane splitting refers to a motorcyclist driving on the dividing line to weave between moving traffic at a higher speed. They normally stay predominantly on the lane dividing line. Typically, this is considered bad practice and is normally condoned by lane splitters.

If you do not feel confident or comfortable with lane splitting, use your best and safest judgement when riding. You are not required to lane split by any means.

Even though there are no laws against lane splitting in California and it is deemed as perfectly legal, there are guidelines to follow to be more aware and safer with lane splitting.

Lane splitting is outlawed in 49 states in the United States. California is the only state that recognizes lane splitting as legal. You run a major risk in receiving a ticket if you lane split outside of California so ride with caution. In 2013, a study also found that lane-splitting is practiced by 36% of California Motorcyclists. This proves that not all motorcyclists practice lane-splitting although it is legal. Lane-splitting can also save you 20 hours a year. In a 2015 Texas Traffic Institute article, they found that the average urban commuter spends 42 hours a year stuck in traffic. Lane-splitting cuts your commute in time there for saving you about 20 hours a year.

Under Jerry Brown in 2016, California established law AB 51. AB 51 defined lane splitting as “driving a motorcycle…that has two wheels in contact with the ground, between rows of stopped or moving vehicles in the same lane, including on both divided and undivided streets, roads, or highways.”

According to California Highway Patrol (CHP), this didn’t necessarily change state law. What AB 51 did instead was give CHP the power to develop guidelines around lane splitting.

Below is the exact law accompanied by VC Section 21658.1:

Existing law requires, whenever a roadway has been divided into 2 or more clearly marked lanes for traffic in one direction, that a vehicle be driven as nearly as practical entirely within a single lane and not be moved from the lane until the movement can be made with reasonable safety.

This bill would define “lane splitting” as driving a motorcycle, that has 2 wheels in contact with the ground, between rows of stopped or moving vehicles in the same lane, as specified. The bill would authorize the Department of the California Highway Patrol to develop educational guidelines relating to lane splitting in a manner that would ensure the safety of the motorcyclist, drivers, and passengers, as specified. The bill would require the department, in developing these guidelines, to consult with specified agencies and organizations with an interest in road safety and motorcyclist behavior.

This law changed in favor of lane splitting because it gives it a clear legal standing now. Although it has been practiced in California for decades, the legitimacy of the act was always surrounded by confusion. This allows California agencies to solidify guidelines regarding lane-splitting now that it is recognized as a legal action on the road.

It Is Only Legal In California, While Other States Are Trying To Legalize It 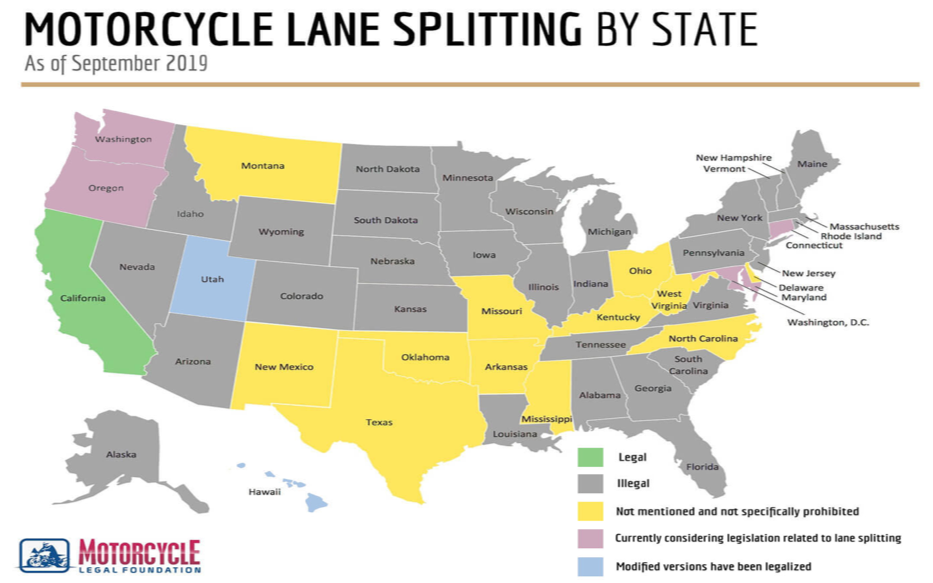 The following states have classified lane splitting as illegal:

Outside of the United States, lane splitting is popular and expected in other countries, particularly in Europe and Asia. Germany restricts lane splitting to when traffic is at a stand-still but everywhere else in Europe you can split lanes even at high speeds.

According to the Hurt Report, known as “the most comprehensive motorcycle crash causation study to date” by the American Motorcyclist Association, “Moderate or heavy traffic was the situation at 59.2 percent of the accidents” studied in the report. It’s been found that riding between lanes is actually safer for motorcyclists than riding in front of or behind vehicles that are so frequently starting and stopping. This proves that lane splitting is the safer option when riding a motorcycle which is why other countries out the United States allow it and it helps reduce congestion.

There are many statistics proving that it is safer for motorcyclists to lane split rather than be a target in stop and go traffic. Although, there are many different circumstances surrounding a motorcycle accident, lane splitting has proven to reduce the chance of being hit.  In a study done by UC Berkley, the following was discovered:

These statistics prove that lane splitting makes motorcyclists safer as far as being a target on the road and allowing room to swerve and avoid accidents.

The most important things you can do while riding is:

As rule of thumb, resort to your human instincts about danger and avoid anything that may feel dangerous in order to keep yourself and others on the road safe.

CHP’s Motorcycle Safety Program guidelines suggest that a motorcycle should travel no more than 10mph faster than the traffic it is passing. It is also not advised to lane-split when traffic starts moving at 30 mph or over. The faster you pass, the less time there is for reaction to an unfavorable situation.

The safest lanes to split are between lanes one and two which are the furthest left. The lanes furthest right have the most movement regarding traffic because they are adjusting for on-ramps and exits. When using the far-left lanes, you will be clear of trailers and semi-trucks, which gives you more visibility over the vehicles allowing you to get a heads up of traffic flow ahead.

The Four R’s when it comes to lane-splitting and riding a motorcycle in general go as follow:

A Message To Vehicle Drivers

As much responsibility motorcycle drivers have to abiding by the lane-splitting laws and guidelines, vehicle drivers also have a responsibility to be cautious of motorcyclists around them. Remember that we are all sharing the road and safety is the number one priority for all drivers.

Make sure to check your rearview mirror and side mirrors for any motorcyclists coming when you are switching lanes. Always make sure to check twice at your blind spots and drive with caution. Don’t be aggressive towards motorcyclists and be aware of your surroundings. We all share the responsibility of the roads we share.

Here are 5 general rules to bear in mind the next time you share the road with motorcycles from Esurance Sharing The Road With Motorcycles.

Increase your driving distance when you find yourself behind a motorcycle and maintain a cushion of at least 4 seconds. Choose an object (a tree, road sign, or house) and count the seconds between when the motorcycle passes and when you pass. This cushion gives you time to react to the unexpected.

You already know it’s important to adjust your driving when Mother Nature rears her rainy (or snowy or sleety) head. But inclement weather is even more hazardous for bikers than for drivers. So if you spot a motorcycle ahead during not-so-awesome weather, anticipate that the rider might have a little trouble and give him a little extra space. Look before you turn

A whopping 44 percent of 2-vehicle, fatal motorcycle accidents in 2013 were the result of a car trying to turn left while the motorcycle went straight, according to the Insurance Institute for Highway Safety. If you see a motorcycle at an intersection, attempt to make eye contact with its rider before turning in its direction. Many motorcycles aren’t equipped with self-canceling turn signals like cars are, so it’s possible that a biker might have his right turn signal on (the old “gradual right”) because the rider simply forgot to turn it off. If you have to pass or drive next to a motorcycle with a lingering turn signal, proceed with caution.

Since motorcycles are smaller than cars, it’s that much easier for them to slip into your blind spot — especially when they’re attempting to pass you. Swivel your head to check your blind spots regularly and, in particular, before changing lanes.

This tip goes for all kinds of safe driving: just be nice. Cut other drivers and riders a little slack and remember that we all make mistakes. It’ll be good for your blood pressure and your driving record.

If You Have Been Injured Riding A Motorcycle In California, Contact Batta Fulkerson Today!A personal injury attorney may be able to help recover damages that can help cover treatment and other costs. Damages can be short-term, but oftentimes injuries from a motorcycle incident can lost a lifetime, affecting not only the injured party, but the family as well.

Contact the team at Batta Fulkerson Law Group today to schedule a FREE one-hour consultation to review your case and available options.

What to expect in your Consultation Meeting: