Pedestrian accidents are largely left unattended or underreported. This is because most pedestrians decide not to report their accident to the police. However, based on recent statistics, the number of pedestrian fatalities is now at its highest level in almost three decades.

The report was based on preliminary data collected in all 50 states plus the District of Columbia. Experts say the 2018 numbers seem to indicate a continuing upward trend in pedestrian fatality statistics.

Who is classed as a pedestrian?

According to the National Highway Traffic Safety Administration (NHTSA) 2017 data fact sheet published in March 2019, a pedestrian is “any person on foot, walking, running, jogging, hiking, sitting, or lying down who is involved in a motor vehicle traffic crash. These exclude people on personal conveyances like roller skates, inline skates, skateboards, baby strollers, scooters, toy wagons, motorized skateboards, motorized toy cars, Segway-style devices, motorized and non-motorized wheelchairs, and scooters for those with disabilities.”

Based on the above definition and common sense, everyone is a pedestrian at one point or another during their day. It doesn’t matter if you own one or several cars, you will still have to walk along a street at some point in the day. Or, if not today, perhaps tomorrow or some other day.

When it comes to dangers lurking on the road, pedestrians are the most vulnerable. The reason being they do not typically wear any protective gear the way motorcycle drivers may wear helmets at a minimum, for example, or undergo any sort of training. They also do not use any form of conveyance which could serve as some sort of protective barrier the way vehicles protect drivers and passengers. 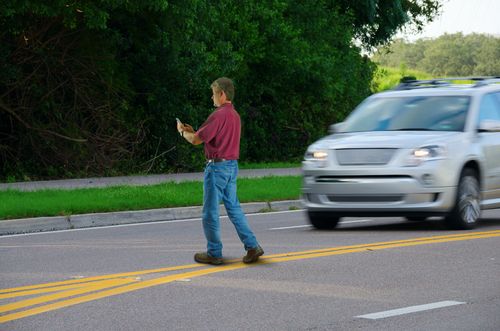 Although formal studies into the causes of pedestrian accidents still need to be carried out, the GHSA cited the increasing number of sport utility vehicles (SUVs) a contributory factor to the rise in crashes. In fact, the GHSA report shows that even though passenger car-related fatal pedestrian crashes still make up the majority, the number of pedestrian deaths involving SUVs has significantly increased, rising by 50 percent (based on 2013 to 2017 figures). Those involving passenger cars increased by 30 percent.

Another culprit for the increasing incidence of pedestrian accidents cited by the GHSA is the growth in smartphone use. Many road users, especially drivers, have reported being distracted by their smartphones, even with the availability of hands-free Bluetooth features.

Other factors mentioned in the GHSA report include population growth – i.e. states that experienced high population growth also reported the most cases of pedestrian deaths – as well as unfriendly infrastructure, and unsafe driving behaviors.

According to the latest NHTSA fact sheet (2017 statistics), similar conditions prevail in the majority of pedestrian accidents: they happen at night or in the dark (75 percent), along an arterial road (73 percent), in an urban area (80 percent).

However, aside from these commonalities, the following conditions or factors may increase your risk of being involved in a pedestrian accident.

Outside of the NHTSA report, there are other common factors that contribute to pedestrian accidents:

Based on annual NHTSA data, thousands of pedestrians are victims of motor vehicle-related accidents resulting in death or injury – and these are only the ones that get reported.

As a pedestrian, every time you step outside your home and walk along the streets or roads, or come near or around parked or moving vehicles, the risk of injury is always present. There are times when the vehicle driver is the one at fault, and there are also instances when the pedestrian turns out to be the negligent party.

However, basic road courtesy tells us that both parties have duties towards one another, known as the duty of care: There are certain accident scenarios that clearly indicate when the driver is at fault for hitting or injuring a pedestrian. Beating the red light, speeding, not slowing down or stopping at a crosswalk, and making a turn on a red light are examples of such accident scenarios.

However, pedestrians are often deemed to be in a better position to prevent their injury or involvement in pedestrian accident cases. The reason being that car crashes involving pedestrians often occur along roadways, and not so much on sidewalks or crosswalks. In such cases, it falls on the pedestrian to decide whether or not to leave the sidewalk and enter a roadway.

Determining who is in the right from a legal standpoint involves the law of negligence. This way, the fault in accidents involving vehicles and pedestrians is determined after investigation. Whichever party is found to not have exercised reasonable care leading to the accident will be considered at fault.

There are cases when both the pedestrian and the driver are found to be at fault so they may share the burden of negligence. However, decisions involving shared fault or negligence may vary from one state to another.

Do you need assistance regarding a pedestrian accident?

If you or someone you know has been recently involved in a pedestrian accident or is thinking of filing a lawsuit regarding the same, get in touch with us at Batta Fulkerson.

We’re ready to answer your questions and ready to help.